Sedgefield Parish Hall is all seated and we cater for up to 120 people. Note, we advise buying tickets as soon as possible because our gigs can sell out early, however, we do have a first come first served reserve list. Find the venue using What 3 Words.

Note: the club is run entirely by volunteers so we may not always get back to you immediately. Thank you in advance.

Laurence Jones has played at some of the most prestigious venues in the world including The Royal Albert Hall in London & The Carnegie Hall in New York.
Buddy Guy personally invited Laurence to join him on stage at the 2017 Holland International Blues Festival in front of an audience of 15,000...
“HE’S LIKE A YOUNG ERIC CLAPTON, DAMN RIGHT HE GOT THE BLUES”. BUDDY GUY 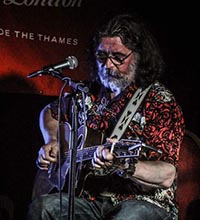 Many people know Gary Grainger as the British Blues Award winning and multi nominated host of The Blues Show on BishopFM.

Blues have held their place in Gary’s heart and he currently presents an eclectic mix of Blues and Americana at pubs, clubs and festivals around the UK.

Gary’s current acoustic set includes a mixture of traditional & modern blues tunes and also includes songs not so much from left field, rather from the West Coast – of the USA. Gary features songs by bands such as Little Feat, Grateful Dead, the Allman Brothers - & ZZ Top.

CORKY LAING (CAN) is a drummer, songwriter, singer and a raconteur. He is best known as the drummer of the legendary bands Mountain (1969-) and West, Bruce & Laing (1973-75). Mountain toured and recorded on and off until 2010.

Since 2015 Corky has been touring the world celebrating the musical legacy of Mountain. A 50th Anniversary of the Mississippi Queen Cowbell World Tour was supposed to start in the USA in the Spring of 2020, but that has been postponed due to the global pandemic. Corky, Mark Mikel (vocals, bass & keyboards), and Richie Scarlet (guitar) were very disappointed. During the pandemic, Corky has been able to play a few shows here and there. The during-pandemic band includes Richie Scarlet (guitar and keyboards) and Joe Venti (bass and vocals.)

Sitting in with K2 (Peter Baron, Ken Sidotti & Joe Venti), a band saluting the music of Mountain, for a couple of gigs in 2014 and 2015 reminded Corky how much he loved playing the Mountain repertoire the way to was originally recorded, and the idea for Corky Laing's Mountain was born. The band has frequently toured Europe, the UK and North America. 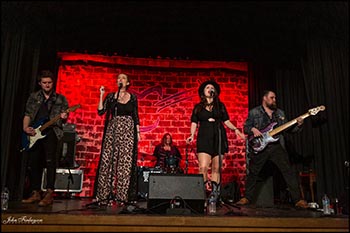 Brave Rival are the South East’s brand-new rip-roaring rock and blues machine. Hailing from Portsmouth, the UK Blues Award Nominated band features the powerful and beautiful twin vocals of Chloe Josephine and Lindsey Bonnick. On lead guitar, providing dramatic guitar solos and crunching rock riffs is Ed “The Shred” Clarke. And holding it all together is the rhythmic backbone, the self-proclaimed engine room of Billy Dedman (bass) and Donna Peters (drums).

Brave Rival are a band on a meteoric rise, firing on all cylinders and are about to take the world by storm. Their unique combination of beautifully harmonic, soulful vocals, epic guitar solos, pounding drums and powerful bass serves up an infectious sound that is not to be missed.

"a great mix of style and harmony...poetry in motion...absolutely superb. Was it a good gig? Yes, it was excellent" Blues In Britain Magazine
Follow Brave Rival Brave Rival Website

‘Wow is all I got to say after that, and boy can Deborah Bonham sing’ Johnnie Walker BBC Radio 2
The band is Paul Rodgers’ Free Spirit Band that toured UK & USA 2017/18.
Blues Matters Magazine: BONHAM-BULLICK is a contender for Album of the Year.
BONHAM-BULLICK #1 single in Euro Chart Top 100.


Deborah Bonham has established herself as one of the finest blues, rock and soul singers the UK has produced. A string of critically acclaimed original album releases, captivating standing ovation concert performances at the Royal Albert Hall, London Palladium and on the USA Stars Align Tour with Paul Rodgers, Jeff Beck and Heart’s Ann Wilson, have continually followed her while also garnering rave reviews.

Belfast born guitarist Peter Bullick, lauded by the press for his passionate and exceptional playing, paid his dues playing clubs and theatres across the UK and Europe for many years. The constant touring allowed Peter to develop his own style while holding dear guitarist Rory Gallagher and others who were a big influence on his playing. Of all the guitarists that influenced Peter it was Paul Kossoff with whom he connected with the most. Years later Pete’s playing would not go unnoticed by none other than Paul Rodgers who selected Pete and the rest of Deborah’s band to back him on his Free Spirit concerts and tours of the UK and USA.